This website uses technical, analytics and third parties cookies to get statistical data processing and quality control, and to allow you to share information with social networks. Please note that if you use the functions that interact with social networks, these could track your navigation with their cookies. To learn more on all our cookies, how to disable them or deny your consent, please read the privacy policy.

You have declined cookies. This decision can be reversed.

While time is an important factor for successful outcome of the crime investigation, the traditional forensic examinations are usually time consuming. It can be very problematic when investigations are underway and quick results are needed. Traces must be detected on-site as soon as possible before they degrade and loose forensic information important for criminal investigation.

The aim of the RISEN project is the development of a set of realtime contactless sensors for the optimization of the trace, detection, visualisation, identification and interpretation on site, with a consequent reduction of the time and resources in the laboratory, and for a fast exchange of information among LEAs.

The new proposed approach could be applied to the classical forensic investigations and to disaster sites, e.g. after a terrorist attack. The objectives of the RISEN project will be obtained by:

The recreated 3D model of the scene resorts to augmented reality techniques for sensor data, collected evidence and identified points of interest in order to deliver a realistic and immersive visual environment for investigators, allowing them to conduct highly detailed investigations. The crime scenes, with analytical information from traces, will be digitally frozen to be available at any time for several purposes in the criminal justice system. The identified traces will be digitally marked and inventoried, and a digitalised Chain of Custody will be established in real-time implementing mechanisms that assure data integrity over its lifecycle. 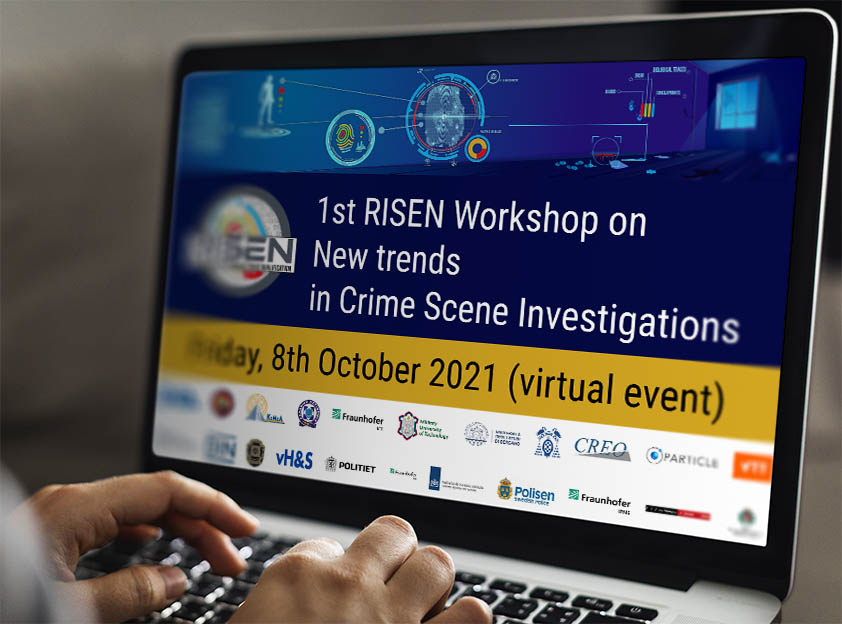 The RISEN project is a collaboration between:

This project has received funding from the European Union’s Horizon 2020 research and innovation programme under grant agreement No 883116.

You have allowed cookies to be placed on your computer. This decision can be reversed.